The Main Line of Sri Lanka Railways is 290.5 km from Colombo (Maradana) to Badulla and is the backbone of the railway network in Sri Lanka. Other lines deviate from Main Line, the Puttlam Line at Ragama (14km), Northern Line at Polgahawela (72km) and Matale Line at Peradeniya (113km).

Rambukkana , which is considered as the end station of Colombo Suburban Area in the Main Line, is 83 km away from Maradana and is the end station of the double line section too. The 14 km section from Maradana to Ragama is having three tracks and the rest of the section upto Rambukkana is double track. The average daily ridership of Main Line is approximately 100.000 with majority of the suburban trains, serving morning peak period, starting from Rambukkana. The daily ridership in the section from Maradana to Ragama is approximately 145,000.

The railway line runs parallel to Kandy Road but, through a different corridor towards West of it and serves 40% of the total passengers in the Kandy corridor to Colombo. The Main Line railway runs along and through urban ceters such as Ragama, Gampaha, Veyangoda, Mirigama, Alawwa,Polgahawela and Rambukkana. The most popular Long Distance express trains from Matale, Kandy and Badulla are served through Main Line. At present, the number of trains reaching Colombo through Main Line in the Morning Peak includes, 12 Colombo Commuter Trains and 3 Long Distance Express Trains. 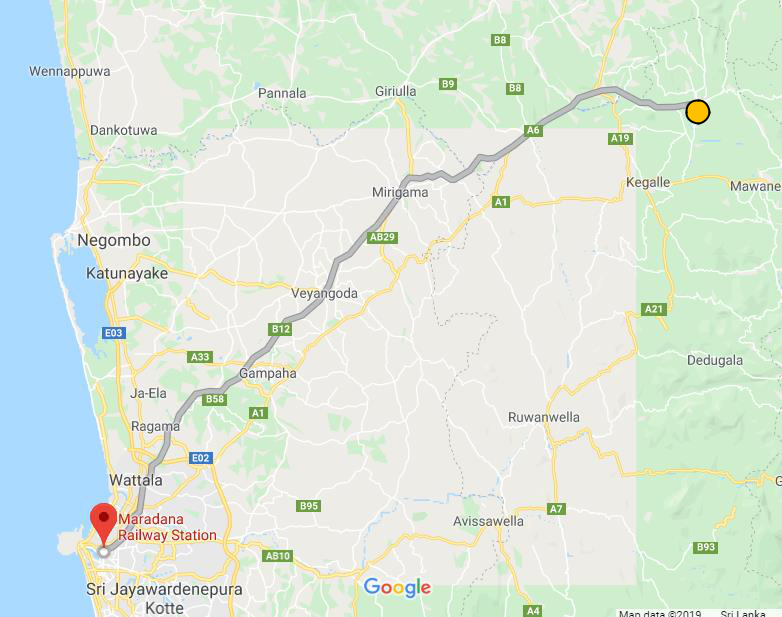 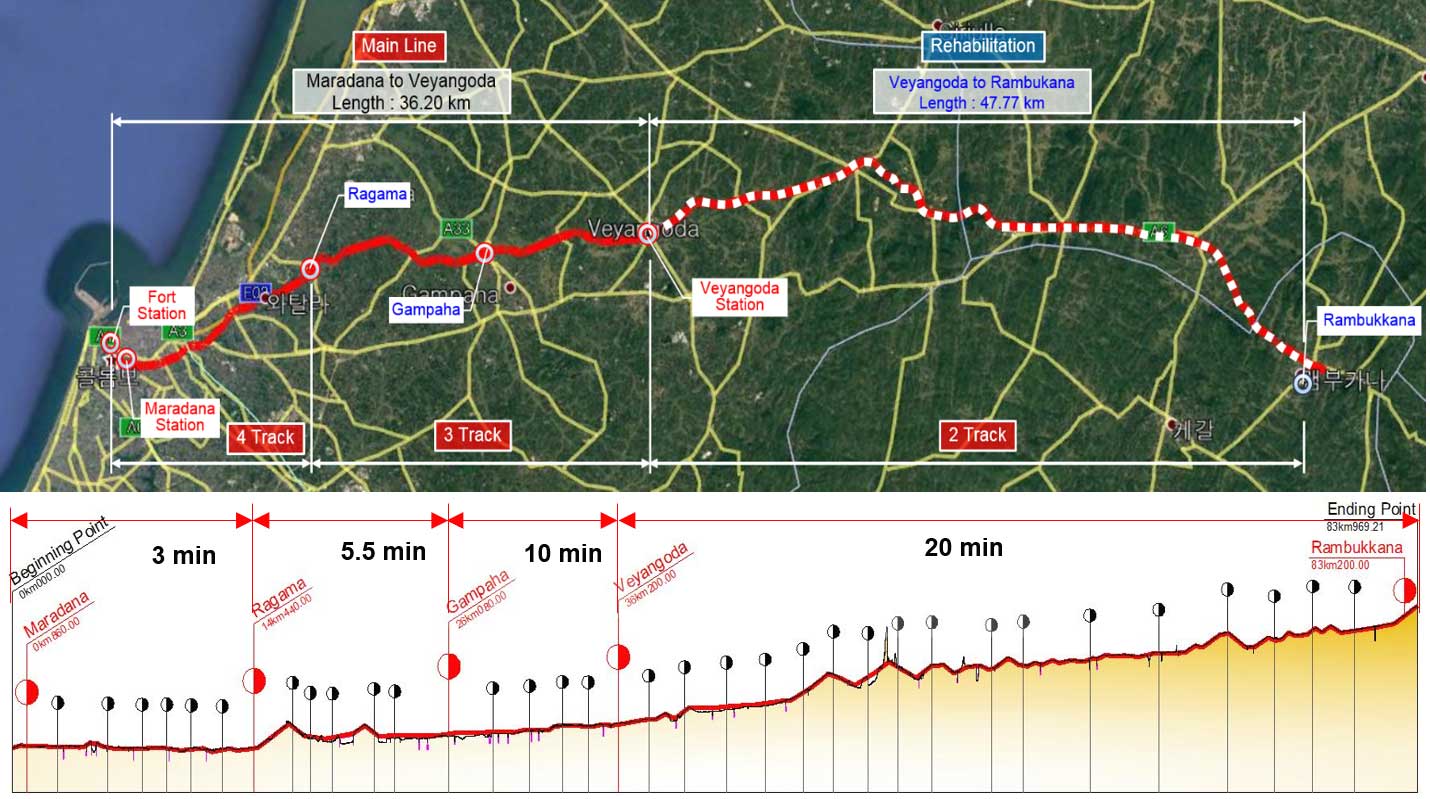 When considering the above issues and the passenger demand for Main Line in 2035, design of Main Line Railway was done based on two studies which were conducted during recent years under the CSR Project.

The other Design Reports related to Main Line have not been released yet.

Factors considered in selecting the solutions for the Main Line

Three Options were considered for the analysis,

Comparison of options and selecting the optimum solution

The minimum curve radius for design speed of 100 kmph and 120 kmph are 620 m and 900 m respectively. Possible alternatives for improvement of existing alignment have been studied for curves of less than 620 m radius. The alignment improvements for straightening curves were accommodated within existing ROW. Limited right of reservations and highly urbanized areas were considered separately and existing alignment curve improvements are made not to exceed the ROW reservations.

The design speed is decided by several factors such as local characteristics, social resettlement and environmental impacts. Therefore, maximum design speed of 120 km/h is considered which is applicable for local conditions. For curves of less than 900 m radius, speed will be reduced accordingly as per prevailing site conditions. The commercial speed is decided by number of stations, safety features to be followed, dwelling time etc.

Resons for considering option – 2 are,
(1). Kiribathgoda – Waththala Road at Hunupitiya Level Crossing is very congested mainly due to railway operation. With development, train operation will be very frequent (3 minute headway) and hence a flyover is the only solution for the level crossing. But, the construction of a flyover has become very difficult because of the elevated expressway with 5.5 meters elevation, at 10m away from Level Crossing.
(2). To avoid demolition of temple at Wanawasa (3). To allow trains carrying Solid Waste to pass the Main Line Railway, without disturbing train operation,
(4). To avoid demolition of many houses at Wanawasala and related compensation payments and
(5). Hunupitiya station will, anyway, be a two level station to have LRT (RED Line) connection.

However, when the level crossing issue was discussed with Road Development Authority (Design Office), the responsibility of designing the flyover was undertaken by RDA. Therefore, Option – 1 was considered as the solution for Vertical Alignment for Main Line.

Train Operation Plan has been prepared to have an efficient and safe train operation. Furthermore, the undermentioned conceptual options were viewed and considered in the operation plan.

Journey Time and Commercial Speed : This is given in the following table. The DMU Travel Time and Speed in the current operation are given in brackets.

The journey time will be recalculated after completion of the design for track alignments and the track layouts of stations. However, the journey time applied to the EMU services shall be decided finally, along with the full system commissioning after completion of construction, because the permissible speed indicated by the signalling system and the ergonomics of train drivers should be taken into consideration.

In order to avoid seriously congested rail traffic in Colombo Fort and Maradana, the direct operation of EMU services between Main, Puttalam and Coastal Lines have been considered. This is called loop operation between railway lines. This will help us to cater Passenger Demand in Main Line and in Coastal Line with limited number of Rolling Stock. The number of train services during peak periods in peak direction has been planned as shown below.