The Coastal Line of Sri Lanka Railways is 187.0 km, from Colombo (Maradana) to Beliatte and runs right along the west coast of the country (only the end section from Matara to Beliatte deviates slightly from the coast).

The line runs parallel to Galle Road, serving the same corridor and serves 40% of the total passengers in the Galle corridor to Colombo. Therefore, the Railway line runs along and through urban ceters such as Mount Lavinia, Moratuwa, Panadura, Kaluthara South, Aluthgama, Ambalangoda,Galle and Matara. The most popular Long Distance express trains in the Coastal Line are from Beliatte, Matara and Galle. At present, the number of trains in the Morning Peak includes 10 Colombo Commuter Trains and 3 Lond Distance Express Trains.

Travel Time comparison: by Bus and by Train 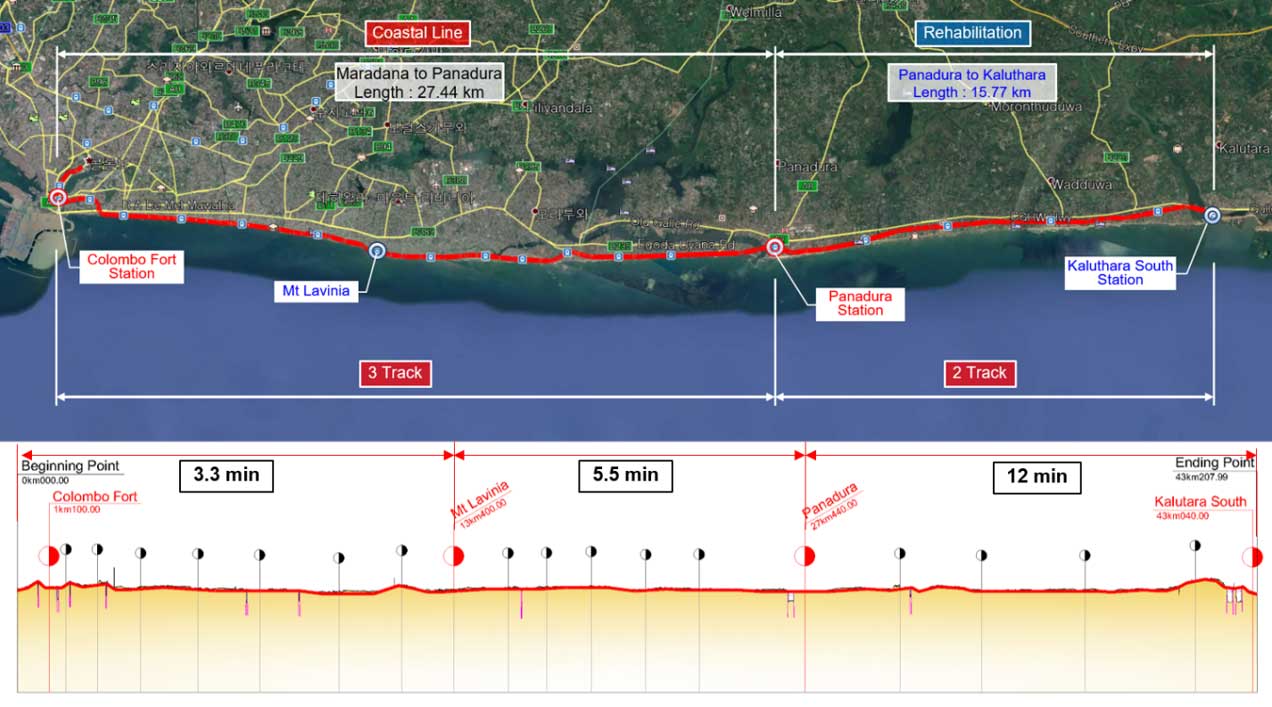 Specific Issues in designing a solution for Coastal Line

In Kelani Valley Line Development, the solution addresses 08 specific issues which are not found in other Railway Lines in Sri Lanka. In Main Line development, we found only general issues.

But, in Coastal Line, the design must address some general and specific issues. As per the demand studies and to cater the demand for Coastal Line in 2025 and 2035, it is necessary to construct the third line from Colombo Fort to Panadura. The Consultancy Team and SLR decided to reserve a corridor for construction of fourth line.

Considering the above issues and the passenger demand for Coastal Line in 2035, design of Coastal Line Railway is ongoing and will be complered in October 2020. Findings of the undermentioned studies are being used for the design.

The other Design Reports related to Coastal Line have not been released yet.

Factors considered in selecting the solutions for the Coastal Line

Two options were considered (1). Existing Alignment, (2). Alignment towards sea from the existing alignment in the reclaimed area of the Beach Nourishment Project. Option-2 was proposed by the consultants of Beach Nourishment Project. However, option-2 was not considered because the railway development and beach deveopment will not happen in synchronism and hence, both projects will be affected if option -2 is selected.

The Maradana to Kaluthara south is 43km, with 20 stations located in the section with average length of 2.15 km between stations. When considering about the passenger demand and number of trains to be operated by SLR in 2035, the track capacity needs to be improved as follows.

When providing additional tracks, coastal line alignment up to Dehiwala Canal section needs to be widened towards sea side. Hence, railway embankment construction needs some reclamation in beach area.

From Maradana to Kaluthara south of the Coastal Line, there are 85 curve sections. Additional line is added up to Panadura and there are 17 locations from Colombo Fort to Kaluthara South where curve radius is less than 620m (min. curve radius to achieve 100km/h speed). Also, many residential houses and buildings located in and around of those locations. Practically, enlarging curve radius more than 620m needs additional land acquisition, house demolition etc. When considering about the reduction in travel time, straightening of railway tracks and achieving higher speeds is not that effective, because of the railway stations at close proximity. Therefore, the new Coastal Line Railway has been straightened and designed as far as possible, within existing ROW to minimize land acquisition and house demolition. However, some curves (Ex: Pinwatte), have been straightened by acquiring lands because the houses are not disturbed.

Three Vertical alignment options for the section from 4.5 km to 10.6 km of the Coastal line were considered.

However, in order to facilitate implementation of both projects in the future, the following way forward has been decided.

When designing the Train Operation Plan, the undermentioned factors have been considered.

Journey Time and Commercial Speed : This is given in the following table. The Travel Times and Speeds of the current oprtation have been given for comparison.

In order to avoid seriously congested rail traffic in Colombo Fort and Maradana, the direct operation of EMU services between Main, Puttalam and Coastal Line has been considered. This is called loop operation between railway lines. This will help us to cater Passenger Demand in Main Line and In Coastal Line with limited number of Rolling Stock. The number of train services during peak periods in peak direction has been planned as shown below.

Train Operation to cater the Passenger Demand in Peak Hour in Peak Direction and to solve congestion in Colombo Fort and Maradana areas (shown under Main Line Development too because the designed operation is a loop operation covering both main line and Coastal Line). 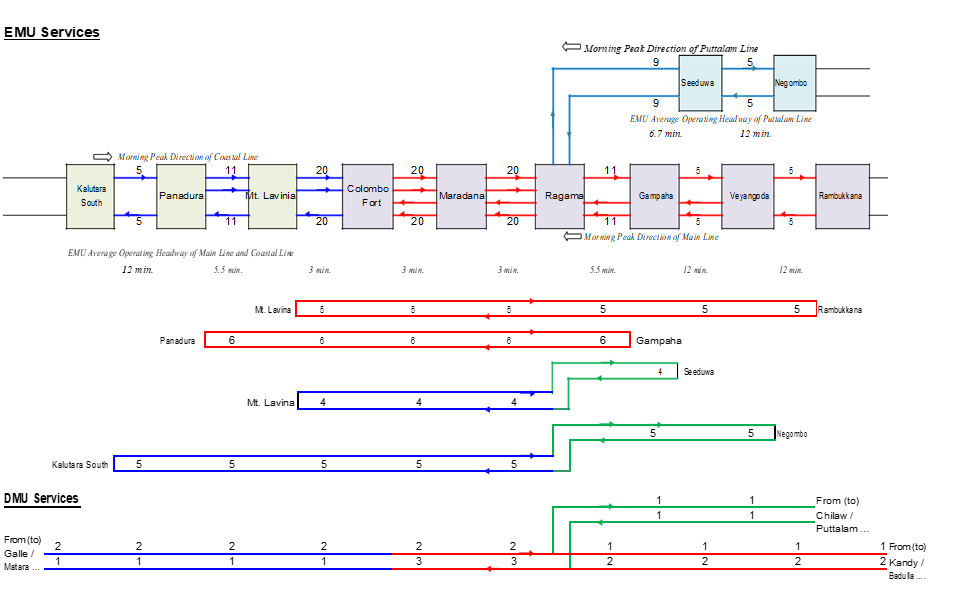