Existing Kelani Valley (KV) Railway Line is not very attractive to commuters due to low train speeds and frequencies. The avreage speed of KV Line is as low as 26km/h. Long delays occur due to poor condition of track, failures in signalling system and high loading levels, specially in peak periods.The Railway line runs along and through urban ceters such as Dematagoda, Narahenpita, Kirulapona, Nugegoda, Maharagama, Pannipitiya, Homagama, Padukka, Kosgama and Avissawella. Homagama and Padukka are the urban centers through which the passengers from Horana corridor can be attracted.The daily passenger volume is only 14,600 (approximately 10% of the total pasenger volume in the corridor), due to above limitations such as low speeds, less frequency (only 3 to 4 trains in the peak hour) and frequest delays. All the trains (except two trains serving school children) in the line are operated during morning and evening peak periods.

Travel Time comparison: by Bus and by Train

Provision of fly-overs has become impossible for majority of level crossings due to existence of High Level Road, running in parallel and very close to Railway Track (if constructed, one side of the fly-over will be landed on the High Level Road)

In the first 20 km section from Maradana to Makumbura, 09 km of parallel roads runs along and within the railway reservetion. These parallel roads (Ex: the parallel road from Navinna to Kottawa) are the access roads to many villages, houses and business establishments and hence, they can not be closed.

The Railway Right of Way (RoW or Railway Reservation) along the KV Line is very narrow and it veries from 8 to 12 m. The entire section (20km) from Colombo to Kottawa is heavilly urbanised and the area adjoining the Railway RoW consists of developed private housing and business establishments.

The railway stations are situated very close to each other and there are 24 railwaty stations in the section from Maradana to Padukka (35 km). The distances between stations vary from 0.6 km to 1.9 km. This limits the commercial speed of KV Line. The entire KV line uptp Awissawella (60 km)consists of 36 stations.

Double track with frequest train service will cause difficulties in using Colombo Golf Ground. Solution is to construct railway as underground or elevated.

When considering the above specific issues which are not observed in other Railway Lines in Sri Lanka, design of Kelani Valley Line is a very critical endeavor. Therefore, several studies were conducted to properly evaluate the KV Line development solution alternatives.

Three Options were considered and the section from Maradna to Homagama was considered for the analysis,

The commercial speed of the existing alignment is of 23.5 km/h and travel time is 68 minutes from Maradana to Homagama.

The following table indicates the improvement to commercial speed and travel time of the three options. Travel time improvement is only 5 minutes in Option – 2 when compared with Option-1. But the difference in expenditure between the two options, is considerable. This is mainly because of the additional land acquisition.

The reader is requested to compare above information (a summary) with the specific factors considered in the KV Line Design. It can be observed that, the leaset cost solution for Horizontal Aignment is, Option – 1 which provide reasonable trave time avantage to the passenger.

Four solution options were considered for the section from Maradana to Makumbura (20 km) by comparing advantages and disadvantages such as frequency of train, construction cost, environmental and social aspect, etc. and the most proper Vertical Alignment was decided.

The Open-cut Underground option was considered maily to avoid disturbance to Colombo Golf Club. However, the Golf Club Officials studied the situation and considered the national ineterest too and agreed for the Elevated Railway Option (Option 1).

The evaluation of options including comparison of expenditure is shown in the following table. The estimated costs for major components have been cosidered in the comparison. However, the Engineer’s Estimates of the KV Line design is now available. Please see the ‘Note’ given below. 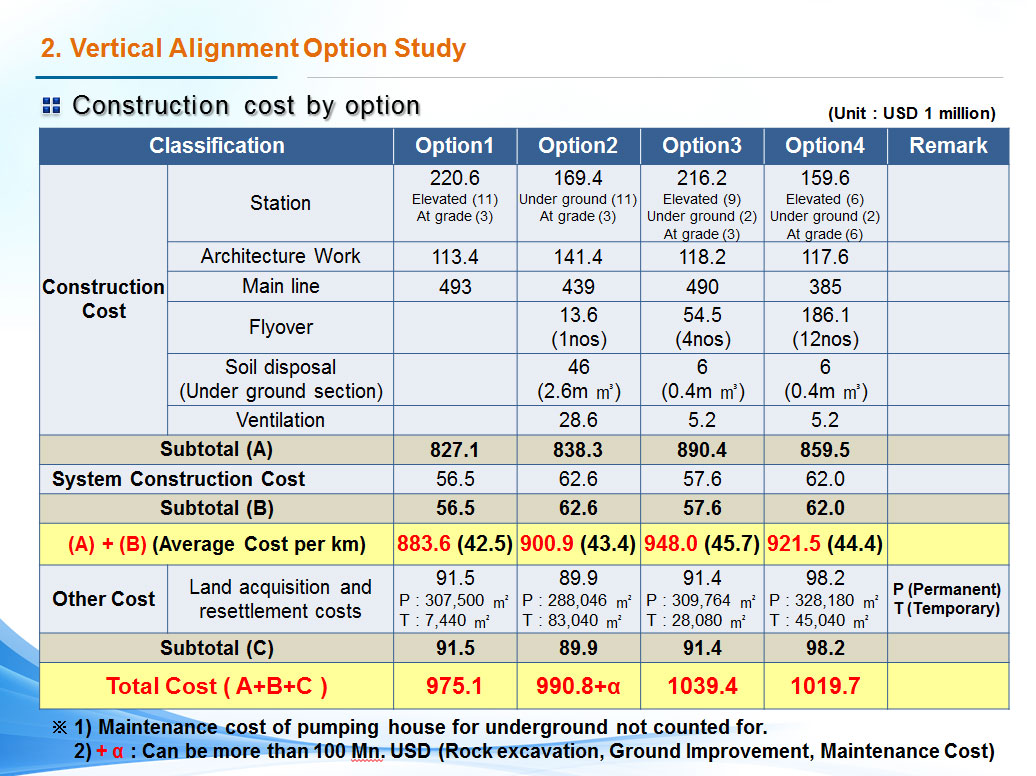 The reader is requested to compare above information (a summary) with the specific factors (listed above) considered in the KV Line Design. It can be observed that, the leaset cost solution for Vertical Alignmant is, Option – 1 which provide solutions to specific issues of KV Line (listed above).

Note:
The above table indicates estimated costs calculated during Feasibility Study of KV Line. Later, the Golf Club Officials agreed for an elevated (not underground) railway in the Golf Club Ground area and hence, the detailed design was done accordingly. The Detailed Designs including Engineer’s Estimate have now been completely prepared and the cost of Option – 1 for section from Maradana to Makumbura is USD 662.8 Million.

The detailed cost estimate of Option I (Elevated double line Railway from Colombo to Makumbura) has been published in Final Feasibility Study Report (can be downloaded from this web site) page 15-45.